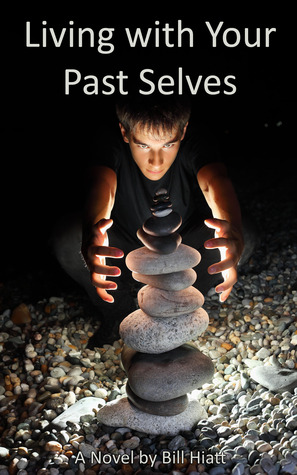 Living with your Past Selves by Bill Hiatt is my latest entry in The January Project. I picked this up on a free day and it embodies the opportunities and risks in self-publishing like few other books I’ve encountered. Read on as I try to explain what I mean.

This novel, aimed at teen readers dips into the Arthurian legends and Welsh mythology and pulls them into the modern era, but defies easy genre classification. Although magic appears in the form of witches, spell-casting and shape-shifters, I wouldn’t call this paranormal, nor Magical Realism. Fantasy seems the best descriptor to me, but I don’t read a lot of fantasy.

There is so much to like about this book – the concept, a modern day teen discovers he is the reincarnation of Taliesin and that someone or something from his past life is trying to destroy him, is fresh. There are some terrific moments of dialogue between the teen characters and even the football players are allowed to have depth. I noticed one typographical error in the entire 600+ book, which is significantly less than this blog post will have.

And yet….. Something was off in this book and I can’t put my finger on it. Maybe the long paragraphs full of introspection disengaged me. I tried to see them as part of the fantasy world building, but some paragraphs extended over two pages and the ideas got lost within them.

Or maybe I’m not used to being inside the head of a teen-male character. Plenty of books for the middle school audience feature male narrators, but I’m not aware of so many for teens, except Catcher in the Rye. Tal resists his hormones too much for him to be confused with Holden Caulfield, but when he does, we get a page long paragraph about why he’s trying not to be insulting to women. I was more insulted by the cardboard female characters than by Tal’s page long discussion of why he tried not to look at boobs.

What pulled me out of the story world the most was that I couldn’t ground the story temporally. Living with Your Past Selves felt dusty. Tal’s friend Stan is a computer wiz who designed the mayor’s website, but it works plausibility wise, but none of the teens have a cell phone. If you have a group of twenty odd teens, you will smart phones. They will take selfies, they will take video unless they are characters in this book. The author took such time with building the mythology but nothing explained the lack of normal teen behavior.

I checked when the book was released. 2012. These kids should be comparing their iPhone models, instead this technology isn’t mentioned until half-way through the book and then once. The author could have handled this so much better. If the manuscript were an old one dug out from a box beneath the bed, then put a date at the start like “Fall 2000.” Another option would be to keep the present day, but have the town’s magic cause it to be a cell-service black hole.

Authors will make their own choices. That is their right as artists and content producers. Living with Your Past Selves is Mr. Haitt’ book, not mine, but as a reader, I couldn’t buy into this particular story world. Sorry.

I swear I’m not a vampire book reader and yet every January, it seems one has fallen into my lap that looks intriguing and needs reviews. This year I found an autographed copy of Peg Pierson’s Flirting with Fangs that probably came in a raffle basket.

Flirting with Fangs is a high concept farce. Heroine Bailey Hamilton writes a successful series of vampire romance novels until her mojo ups and leaves alongside her cheating husband. When a bit of magic brings her brooding vampire hero, Torin Kane, to life complications arise for Bailey’s heart and career.

Brutal honesty – I didn’t care for this book at first. I almost stopped twenty pages in because I hadn’t connected with the book and I’m not sure why. The concept amused me (I happen to be a big fan of Jasper Fforde’s Thursday Next series). I kept reading because I noticed a quirk in the writing that impressed me. Pierson’s use of language changed in a meaningful way. The segments Pierson wrote as a novel by Bailey Hamilton incorporated a more flowery and melodramatic imagery than presented in the story’s “present day.” Torin’s dialogue as Torin-not-written-by-Bailey introduced a third linguistic style.

The contrast between these styles kept me engaged enough that I read on to see how my observation played out. I’m glad I did because the last third of this book is a rollicking laugh out loud farce that combines violence, scatological humor, sex, Halloween, public disaster, public drunkenness and Satan. Yeah, it’s that kind of book. In a standard rating form, I’d give the first part of the book a 3, well written and clever, but not my taste. The later portion full out 5 star absurdism.

I would not be a fan lining up to buy Bailey Hamilton’s books, but I’m open to reading more Peg Pierson.

You can pick up Flirting with Fangs at Amazon    or Barnes & Noble.

After one false start, I’m finally posing my first review for The January Project 2015. First up, the brand-spanking-new contemporary romance The Confection Connection by Monica Tillery.

The Confection Connection conforms to not only the essential element of romance – the happily-ever-after but also to a tight focus on the primary romance and how the characters grow and change within and because of that relationship. In this case, Carly Piper and Michael Welch are rival bakers from the same geographic region who once competed for top cake honors in an eliminations style cooking show. A high profile wedding sets them in conflict but in a misunderstanding, the bride-to-be decides they are a couple and she wants her wedding cake made by them.

Ms. Tillery aptly handles the conventions of romance and the path from “They hate each other” to “They love each other” is a believable and satisfying journey.  The characters are complex and well rounded. Michael in particular will remind readers of some of their favorite Food Network personalities. The bride-to-be grew on me after my initial dismissal of her as a crackpot. She is a fun secondary character handled deftly, not obtrusive, but integral to the plot. If you watch a lot of cooking shows on TV, put down the remote and pick up this book, especially when something boring is on, i.e. a recipe not involving sugar or butter.

From the cover and the character professions, I expected this would be more of a foodie book.  For better or worse, it did not make me run to my closest cupcakery for a buttercream fix. When I read food scenes in any book, I want to salivate and vicariously enjoy forbidden treats like peanut butter (I’ve written elsewhere about food allergies in my family).  That’s more my issue as a reader than the fault of the author.